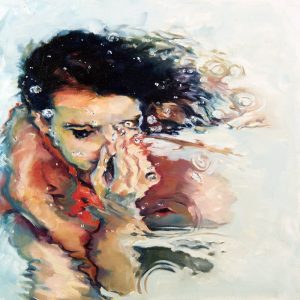 Corynn Kokolakis’ vivid renderings record intimate moments of transition and development, capturing children when they are most honest and without reserve. With an emphasis on the caregiver’s point of view, these sensitive portrayals anchor the fleeting firmly in paint, giving weight to emotion and memory. The work is painted allaprima, welcoming the viewer to explore the material processes of oil paint. The result is a contrast that plays between the stillness of the image and the dynamic movements inherent in the physical act of painting.

Kokolakis is a full-time artist and mom of three. Having given up painting for over a decade to raise her family, her reinvigorated practice merges the disparate roles of mother and artist through the centering of child development and the labour of caregiving. She earned her BFA in the Drawing and Painting program at OCADU, where she received the Akin Career Launcher Award. Her work has been featured on Breakfast Television, CP24, and She Does the City. She works out of the Akin Studios in Toronto and her work can be found in private collections in the UK, US, Australia, and Canada.

Click the arrows to view all auction artworks by Emerging Artists, or the checkerboard icon to return to the Artworks master list.