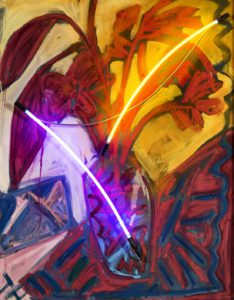 Thrush Holmes is a Toronto artist known for his colourful and erratic paintings. Whether spraying wood panel with spray paint and neon or carving out wood sculptures with a chainsaw in hand, Holmes’ unapologetic methods elevate still lives, reclining nudes, and even poetry from their traditional banality to culty, fetishistic status. Intuitive and swaggering in practice, his work reveals eccentric florals, brazen female silhouettes, glowing prose, and monumental “TH” initials – an exuberant display of ego, machismo, and expressionist bravado, rife also with subtle romanticism and raw honesty. In the work for Art Gems, he mixes the classical motifs of the flower still life with bold slashes and neon.

Holmes has been widely exhibited throughout Canada, and he is placed among Canada’s top-selling living artists. His work can be found in prominent permanent collections such as the Elton John Aids Foundation, Sony Music and Defjam Records in New York, DreamWorks Studios in Los Angeles, among others. His work was profiled in Carte Blanche Volume 2: Painting (a survey of Canadian Painters). His work was most recently included in shows at PULSE Miami, Mike Weiss Gallery in New York, Beers London, UK and in the solo exhibition, Thrush Holmes: Personal Work at the Library Street Collective in Detroit.