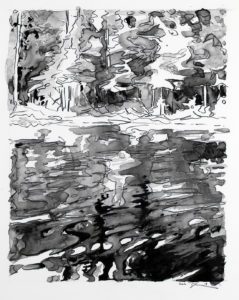 Art Gems thanks TD for generously committing to a matching gift equivalent to the hammer price of this lot, up to a maximum of $2,500.

Steve Driscoll is an artist whose approach to painting transforms the traditional Canadian landscape into contemporary expressionism. Recognized for his psychedelic palette, Driscoll’s innovative use of a urethane-based paint poured from above not only adds texture and life to his paintings, but also brings a chemical modernity to each piece. The resulting work is a celebration of both colour and the materiality of paint. The painting in this year’s Art Gems is a part of a recent series of works in which the artist replaces his vibrant palette with black pigment, allowing the viewer to envision the bright colours of the northern Ontario landscape. Driscoll elevates what is typically the underpainting in his larger works, into the primary subject matter in this series.

An Ontario College of Art and Design graduate, his work can be found in the Corporate Collections of TD Bank, BMO, The Four Seasons, and Nordstrom Vancouver/Toronto. Driscoll has received acclaim nationally and internationally, and his shows continue to sell out. He was recently featured in an exhibition at the McMichael Gallery in Kleinburg, as well as a solo show at Gallery Stratford in Stratford. In 2019, the Tom Thomson Gallery in Owen Sound will host a solo exhibition of his work. Driscoll lives and works in Toronto, where he is represented by Angell Gallery.