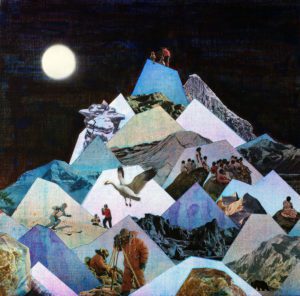 Winnipeg artist Simon Hughes is a multi-disciplinary artist whose practice encompasses painting, drawing, film and video. Since 2000, he has worked almost exclusively on paper with watercolour, collage and other media, moving from earlier narrative works exploring regionalism and ideas of “the North” into more recent abstract works investigating the history of Modernism, 1960s pop-psychology, and the mark-making of children. Hughes’ recent works reveal his fascination with the Canadian abstract canon and its interaction with visual culture mediums. A Critical Modernist at heart, his abstracts and quasi-architectural renderings create fantastical Canadian scenarios, indulging his interest in childhood pursuits by referencing Lego bricks and stickers. Using these childhood tools and armed with a playful attitude, he becomes an architect and city planner of imaginary buildings in an imagined northern city.