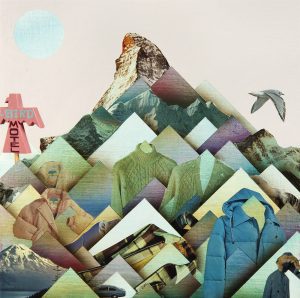 Donated by the artist and courtesy Patel Division Projects

Simon Hughes is a Winnipeg-based artist whose practice encompasses painting, drawing, printmaking, film and video. Around 2000, he began working almost exclusively on paper with watercolour, collage and other media, moving from narrative works exploring regionalism and identity into more recent works combining landscape and abstraction. He has since expanded his painting practice to include mixed media works on canvas. His most recent body of work, an example of which is included here, involves abstracted landscapes made of collage and translucent acrylic paint to create mountainous thought-forms.

Hughes received a BFA from the University of Manitoba in 1996 and an MFA from the University of California, Irvine, in 2010. His paintings and works on paper are in the collection of the National Gallery of Canada, The Winnipeg Art Gallery, the Art Gallery of Nova Scotia, as well as many corporate and private collections in Canada and abroad. He has received grants from the Manitoba and Winnipeg Arts Councils, and the Canada Council for the Arts. Hughes is currently in production on a large public artwork in Etobicoke for the Metrolinx transit authority. He is represented in Toronto by Patel Division Projects.