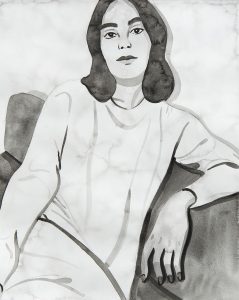 Girl on a Couch (Study)

Donated by the artist and courtesy Patel Gallery

Sarah Letovsky takes inspiration from the tradition of figurative painting and the female subject as muse, with a painting language wholly her own – in which flesh, faces, and background invite a play between subject, brushstroke, and the physical process of painting. Influenced by the interior lives of women, Letovsky’s work often evokes a sense of intimacy, hinting at spaces of belonging and familiarity such as bedrooms and living rooms. Reminiscent of selfies (a camera is never directly featured but implied), Letovsky raises questions about who the image is for, and by. Her work invites the viewer to consider the self-image as a contradiction and an equilibrium in which the private becomes public, a work of both intimacy and exhibitionism.

Letovsky completed her BFA at OCAD University in 2014 in Drawing and Painting, and was the recipient of the Mrs. W.O. Forsyth Award for Excellence in Painting. Her work has been featured in two solo exhibitions at Patel Gallery in Toronto, where she is represented.