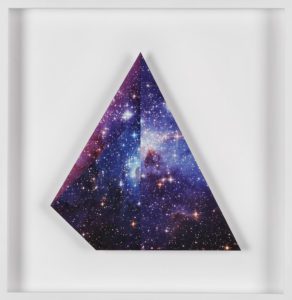 Sanaz Mazinani is an artist, curator and educator based in San Francisco and Toronto. Her artistic practice explores the relationship between perception and representation. In works such as the one for Art Gems, Mazinani methodically reconfigures photographs from NASA’s Hubble Space Telescope, using scientific imagery of star clusters and supernovas that are imbued with the awe-inspiring power of the unknown. Central to her practice is the study of digital photographic propagation and its impact on representation and perception. For Mazinani, visualizations of deep space infer the latent beauty of the unknown.

Born in Tehran, Iran, Mazinani currently lives and works in San Francisco and Toronto. She holds an undergraduate degree from OCADU and a MFA from Stanford University. She has exhibited nationally and internationally, including Toronto, Vancouver, Calgary, New York, San Francisco, Dubai, Frankfurt, Zurich. Her work is in private and public collections, such as Connor, Clark & Lunn Financial Group, Facebook Inc., Kala Art Institute, San Francisco International Airport and Tabrizi Law Office PC, among others. She has recently completed a major piece commissioned by Out of the Box Projects in affiliation with the D.C. Commission on the Arts & Humanities. Mazinani is represented by Stephen Bulger Gallery in Toronto.