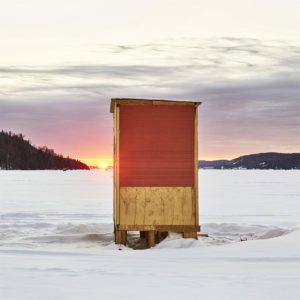 Art Gems thanks Scotiabank Wealth Management for generously committing to a matching gift equivalent to the hammer price of this lot, up to a maximum of $2,500.

Richard Johnson is a Toronto-based photographer, whose work centres on the Canadian culture of ice fishing. As with its distant cousins, the native Teepee and the Igloo, the ice fishing hut has its own essential purpose; it must be weather resistant and transportable, giving basic shelter and access to the ground beneath it. In the late 2000s Johnson began travelling across Canada, capturing the architectural structures associated with ice fishing, creating the Ice Huts project, his series of more than 800 images of individual ice huts and many ice villages.

Johnson’s austere photographs of far-north ice fishing huts are set against wide expanses of grey skies; framed head-on, the huts become blocks of colour. His study of the huts is also a field guide to their eccentricities. Each cabin bears the mark of its maker, a comment on the intrinsic relationship between necessity and creativity. Johnson’s photographs can be found in numerous private and corporate collections, including Edelman Canada, HOK Architect, McCarthy Tétreault, the Bank of Montreal and Rawlinson and Hunter Chartered Accountants, London, UK. Johnson’s Ice Huts project was featured in The New York Times in December 2014. Last year, a retrospective of his Ice Huts series was featured at White Wall Gallery in Toronto and the monograph The Ice Hut Book was published.