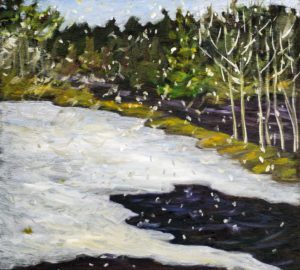 Rae Johnson’s need to paint her environment comes from “simply existing as a northern person who is constantly engaged with surviving our extreme elements.” The forces of nature are etched as deeply in our collective psyches today, as when the Group of Seven and others were creating their paintings almost 100 years ago. Rae continues to approach her work in a spirit much like theirs, and finds a source of regenerating creative power in the relentless force of nature.

Since graduating from OCAD in 1978, Johnson has been regularly exhibiting her paintings nationally and internationally, and her work is in numerous public and corporate collections, including the University of Toronto, McDonalds and Noranda. With a group of fellow artists, Johnson formed ChromaZone in the early 1980s, an artist collective that spearheaded Toronto’s figurative painting movement of the 1980s. ChromaZone also curated and produced hundreds of exhibitions from 1981 to 1986 in Europe and North America. Johnson began teaching drawing and painting at OCAD in 1988. She is represented by Christopher Cutts Gallery, where her most recent solo exhibition was held in 2015.