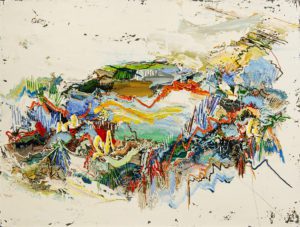 Nicole Katsuras approaches her art with a playful sense of imagination. Her vivid abstractions hint at notions of the natural world: jungles, islands, maps, animals and flowers. To create her thick and boldly coloured paintings, she employs a variation of knife, brush and irregular mark-making tools, all the while squeezing paint directly from the tube to contour gradient swirl patterns. The layers of impasto overlap one another to create a striking visual complexity. Each work redefines the relationship between artistic sophistication, pastiche, playfulness and confidence.

Katsuras received an Honours Bachelor of Arts from the University of Toronto, and a Master of Fine Arts from the Central Saint Martins School of Art and Design in London, UK. Recent exhibitions include a solo show at Corkin Gallery in Toronto, the exhibition Riptides and Thunderstorms at 944 Queen Street West and Parade 1 at Track and Field Gallery in Toronto. Her work can be found in numerous corporate collections, including McCarthy Tetrault, Canaccord, Encana, RBC Capital Investments, Mirvish Collection and Holt Renfrew, among others.