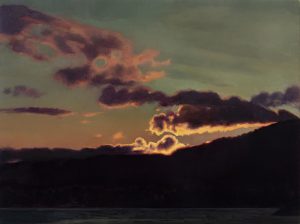 Born in Peterborough, Nick Bierk is the son of renowned artist David Bierk and brother to Jeff, Alex and Charles, also artists. Growing up surrounded by the work of his father, and in an environment of creative people, has had a profound influence on his practice. While portraiture is the constant in his practice, according to the artist, his father “instilled in me a strong desire to let the studio be a place to play, explore and fail. Because of this, my work jumps around in terms of its subject matter and execution, yet remains connected by a dotted line that leads back to him [my father].” Like his brothers, Nick does not shy away from the honest portrayal of real-life experience, creating enigmatic works that invite the viewer to imagine beyond what we see.

Bierk attended the Rhode Island School of Design to study painting. In 2014, his paintings were included in After, a group show at the Art Gallery of Peterborough, alongside works by his brothers and father. Bierk lives and works in Toronto, where his work was most recently exhibited at Patel Gallery.

Art Gems 2020 is pleased to feature works by 3 of the Bierk brothers: Nick, Alex, and Charles.