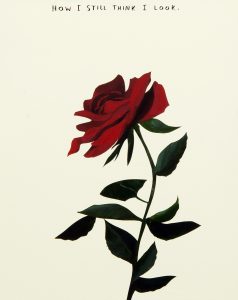 How I Still Think I Look

Donated by the artist and courtesy Patel Division Projects

Winnipeg-based artists Michael Dumontier and Neil Farber were founding members of the internationally acclaimed Royal Art Lodge, remaining with the group until its disbandment in 2008. For over 20 years, Dumontier and Farber have been collaborating together on idiosyncratic paintings with poetic aphoristic and humourous reflections on day-to-day life. The artists handle paint with a studied crudeness, bringing to mind outsider art’s earnest, underdog aesthetic, and turning the act of painting – traditionally a serious, solitary affair – into something casual and collaborative. The work in this year’s Art Gems is from a series of flower paintings, each matched with a line of text. For their writing, the artists draw inspiration from absurdist stand-up comedy and surrealist humour. While their work has an air of charming nonchalance, their musings often speak of the complexities surrounding the human psyche and emotions.

In 2014, the duo was shortlisted for a Sobey Art Award for their Library series. Both artists have shown their work in solo and group exhibitions across Canada and internationally, in Los Angeles, New York, London, and Malmö (Sweden), among other cities. Their work is in the permanent collections of the National Gallery of Canada, the Vancouver Art Gallery, the Winnipeg Art Gallery, Centro de Arte Caja de Burgos (Spain), Folkwang Museum (Essen), La Maison Rouge (Paris), and in the collection of fellow artist Takashi Murakami (Tokyo). Dumontier and Farber are represented by Richard Heller Gallery in Los Angeles and in Toronto by Patel Division Projects.