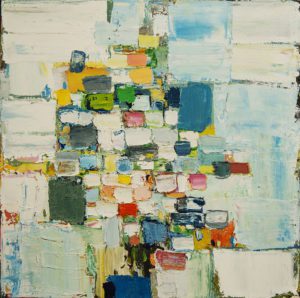 Michael Adamson is renowned for creating lush, colour-saturated abstractions that reveal an overall energetic exuberance. Exploring both gesture and materiality, he builds his canvases with every brushstroke, developing the layers through definite marks, drips and scrapings. Adamson seduces the viewer with textures and layers of paint, which at times are punctuated with dots of colour.

Adamson is a Toronto-based artist who graduated from the Emily Carr University of Art and Design, and also trained at Ryerson University and the esteemed Gesamkunst Hochschule in Germany. He has exhibited throughout Canada, the United States, the United Kingdom and Japan. His work can be found in corporate collections, including Bennett Jones, Bank of Montreal, RBC, and Holt Renfrew, among others. His work was featured at the Varley Art Gallery in Markham and in the exhibition Vector Tangent at Track and Field Gallery. Adamson’s most recent shows took place in 2016 at Thompson’s Gallery in London, UK and at Couture Galleri in Stockholm, Sweden. A book on Adamson entitled Open Road: Paintings 2016-2018 was published this year.