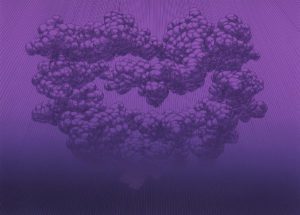 Art Gems thanks AON for generously committing to a matching gift equivalent to the hammer price of this lot, up to a maximum of $1,000.

Meaghan Hyckie deconstructs and visualizes space in her drawings as a way to reflect on environmental, political and existential ideals and anxieties. Using drafting and perspective-drawing techniques as the armature, her work provides a structure to investigate the perception of space and the vernacular of drawing. In her cloud-form series, such as the one featured in this year’s Art Gems, Hyckie references the extensive use of cloud imagery in art history, all the while reconstructing it into jarringly contemporary colours and unsettling forms. These works can be interpreted as clouds within a traditional landscape genre: as something tiny like an atom or an element, or as something huge and kinetic like an explosion. Drawings that may initially appear banal, deteriorate and become more sinister as the viewer looks at them.

Hyckie is a Toronto-based artist whose work has gained significant recognition in recent years. She received a BFA from OCAD University in 2007 and has attended residencies at the Vermont Studio Center and the Banff Centre. She is the recipient of numerous awards and grants, including the Young Artist Prize at Britain’s National Open Art Competition and an Elizabeth Greenshields Foundation grant. Corporate collections include the BMO Corporate Art Collection, and her work has been exhibited in Canada and the UK. Hyckie is represented by Olga Korper Gallery in Toronto.