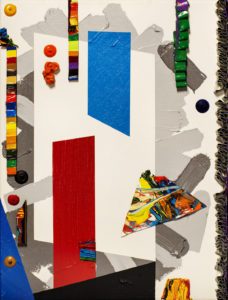 Max Johnston’s abstract material-based paintings extend the physical language of paint. While he began his career as a graffiti artist, he keeps his street art separate from his fine art practice. The energy found in his graffiti work have nonetheless influenced his paintings, which seem to leap off the walls, in part due to an inventory of painterly effects that seem wholly original. Different coloured blobs of pigment hold random bits and pieces just above the canvas surface; chunky lozenges of paint made by building up layers of impasto on glass, and then cutting them away from it, are then glued here and there onto the canvas.

Johnston likes to set up compositions where each element vies for the true surface, but the eye can never rest on one. The interplay between the collected elements creates a new aesthetic beyond the value of each individual element. Johnston’s paintings are compelling visual objects that defy any logical painting practice. His work is held in many private and public collections throughout North America. His most recent show, Quarter Century Survey, was held in February 2016 at the Christopher Cutts Gallery, Toronto, where he is represented.