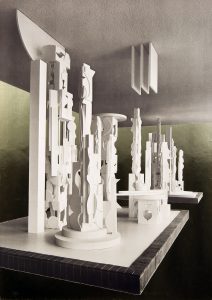 Donated by the artist and courtesy Caviar20

Louise Nevelson is one of the most revered and unique sculptors of the 20th century. An American artist best known for her monochromatic wooden assemblages, Nevelson’s work has had an undeniable influence on a host of significant artists ranging from Tony Cragg to Louise Bourgeois. During the 1950s, Nevelson began to create unique arrangements contained in wooden frames amassed from a range of found objects—usually woodcuts or bits of furniture—that were then painted a uniform black, white, or gold. “I think most artists create out of despair,” Nevelson observed. “The very nature of creation is not a performing glory on the outside, it’s a painful, difficult search within.”

The work offered at this year’s Art Gems, a screenprint with gold foil overlay, depicts Nevelson’s monumental public sculpture Bicentennial Dawn. Commissioned in 1976 for the Philadelphia Courthouse to mark that nation’s 200-year anniversary, it is possibly her largest single work of art. The sculpture consists of 29 elaborate column-like forms residing on three separate terra-cotta bases in addition to elements suspended from the ceiling. Like the best of Nevelson’s work, the sculpture alludes to tribal art and utopian or post-apocalyptic architecture. Nevelson died in 1988 in New York at the age of 88. Her work can be found in the collections of the Tate Gallery in London, The Museum of Modern Art in New York, the Art Institute of Chicago, and the Walker Art Center in Minneapolis, among others.