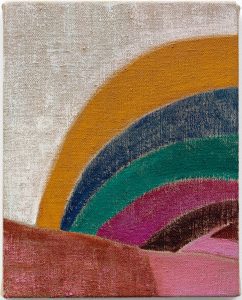 Donated by the artist and courtesy Daniel Faria Gallery

In 2017, Kristine Moran and her family began a journey. They sold their Brooklyn home and studio, bought a 30-foot long Airstream trailer, and embarked on a drive across North America. They covered 27,000 miles and visited 23 states, 4 provinces, and 1 town in Mexico. While on the road, Moran created a large body of works that not only documented the journey, but also transformed the nature of her painting. While Moran has an amazing ability to transform gesture into gorgeous forms, the cramped conditions of the trailer studio restricted her painting style. “It changed the gesture into something that was quieter, and the painting itself became much thinner… It was freeing and it gave me the ability to focus on the colour and form without having to feel I was reinventing the wheel every time.” Lonely Island, the painting included in this year’s Art Gems, exemplifies Moran’s new approach to painting.

Currently based in Owen Sound, Moran received her MFA from Hunter College in New York after attaining a BFA at the Ontario College of Art and Design in Toronto. She has exhibited nationally and internationally at Nicelle Beauchene (New York), RH+ (Istanbul), Western Exhibitions (Chicago), Left Field Gallery (San Luis Obispo, California), Cuevas Tilleard (New York), and the Glenbow Museum (Calgary). Moran’s work was featured in Phaidon’s Vitamin P2, and her work has been acquired by several international public collections, including the Saatchi Collection (London, U.K.) and the Albright Knox Gallery (Buffalo). Moran is represented by Daniel Faria Gallery in Toronto.