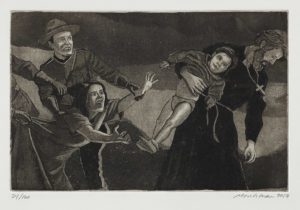 Kent Monkman is a Canadian artist of Cree ancestry who is well known for his provocative reinterpretations of romantic North American landscapes. Themes of colonization, sexuality, loss, and resilience – the complexities of historic and contemporary Indigenous experience – are explored in a variety of mediums, including painting, film/video, performance, and installation. Monkman has created memorable site-specific performances at the McMichael Canadian Art Collection, the Royal Ontario Museum, the Smithsonian’s National Museum of the American Indian, Compton Verney (U.K.), and most recently, at the Denver Art Museum. His award-winning short film and video works have been screened at various national and international festivals, including Berlinale, and the Toronto International Film Festival. His second national touring solo exhibition, Shame and Prejudice: A Story of Resilience will visit museums across Canada until 2020.

Monkman has been awarded the Egale Leadership Award, the Indspire Award, the Hnatyshyn Foundation Visual Arts Award, the Bonham Centre Award, an honorary doctorate degree from OCAD University, and the Premier’s Award for Excellence in the Arts. His work has been exhibited internationally and is included in the collections of major Museums in Canada and the USA. He is represented by Patel Gallery, in Toronto.