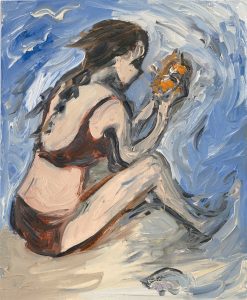 Donated by the artist and courtesy Antoine Ertaskiran, Montreal

Depicting scenes drawn from her imagination, Jane Corrigan’s paintings evoke the narrative forms of cinema and the novel, suggesting a kind of comic book impressionism. The Canadian-born, New York-based painter foregrounds fictional personages and situations in the midst of arresting narratives that seem cropped from cinematic storyboards. The mostly female subjects are engaged with a focus just shy of meditation, passing through the world. Her signature staccato paint application suggests an inordinate fluidity in her compositions, and they hold us effortlessly in their grasp. Always located in times and places that are difficult to determine, Corrigan’s art possesses timeless and universal values.

Following her BFA studies at the Nova Scotia College of Art and Design, Corrigan attended the Yale Norfolk Summer School of Art, and completed an MFA at SUNY Purchase. She has exhibited extensively in New York, including shows at White Columns, Kerry Schuss, Retrospective, Feuer/Mesler, Marinaro, and Sikkema Jenkins, as well as in London at the Wilkinson Gallery. In 2013 she was a recipient of the Louis Comfort Tiffany Award, and has been granted residencies at the Fine Arts Work Center in Provincetown, Massachusetts and at the Marie Walsh Sharpe Space Program in Brooklyn. Her work has been written about in various publications, including The New York Times, Artforum, Art in America, and ArtNews. She is represented in Montreal by Antoine Ertaskiran Gallery, where her 2019 show received rave reviews.