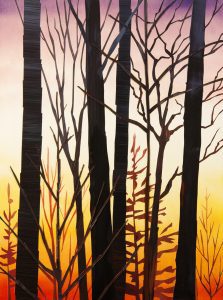 Donated by the artist and courtesy Angell Gallery

Gavin Lynch is a key player in the new vision of landscape painting that is invigorating this archetypal Canadian genre. Employing a collage approach to the picture plane, Lynch resists pictorial and painterly continuity in favour of unexpected and often conflicting combinations of elements, some derived from memory, others from the artist’s imagination. Sharply delineated forms are juxtaposed with fluid areas, wavering between material flatness and pictorial depth, luminosity and darkness, and abstraction and representation. Lynch’s paintings exude an energizing tension that invites extended looking.

In 2014 Lynch was a finalist in the RBC Painting Competition. His work has been exhibited across Canada, and can be found in numerous collections such as the Royal Bank of Canada, Nordstrom, University of Toronto, Toronto Dominion Bank, and the City of Ottawa Public Art Collection. In 2017 he was commissioned to create a large mural in the VIP Air Canada lounge at Pearson International Airport. Based in Wakefield, Quebec, Lynch is represented by Angell Gallery in Toronto.