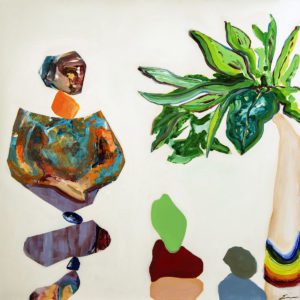 Erin Armstrong is a figurative artist who uses quick and decisive gestural markings over acrylic-based images to create people in everyday situations, in an expressive and dream-like world. Her concern is not to recreate reality as it exists, but rather to evoke a feeling and an atmosphere that transports the viewer into a world of personal interpretation.

Her work has been exhibited nationally and internationally, and can be found in private collections in Canada, the United States, Australia, Sweden and England. She was recently selected by Saatchi Art’s chief curator, Rebecca Wilson, as one of “20 Emerging Artists in the World to Follow.” In 2016-17, Armstrong has exhibitions in Toronto, Australia, Stockholm, Edinburgh, London, Oslo, Miami and New York City. She is represented by Bau-Xi Gallery in Toronto.