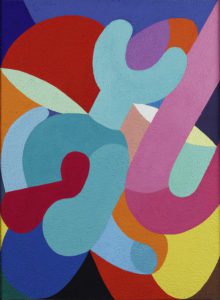 Art Gems thanks Leeanne Weld Kostopoulos, Johnston & Daniel Division for generously committing to a matching gift equivalent to the hammer price of this lot, up to a maximum of $3,500.

Daniel Hutchinson is an artist who, for the past decade, has been exploring the artistic possibilities of black paint, sculpted with striations that capture or reflect light in ways that create the illusion of space. The movement of the viewer, back and forth, changes the appearance of the works, either flattening them or creating the illusion of folds, ripples, cavities and projections. Many of the black paintings would include a colourful underpainting, which added colour to the work, as well as a further dimension. The painting in this year’s Art Gems, with its bright, almost fluorescent palette, is a departure from his earlier monochromatic series. In Barton Shoes, what was once underpainting has now become the main subject matter of the painting.

Hutchinson received his BFA from the Emily Carr Institute in Vancouver and his MFA from NSCAD University in Halifax. He has exhibited across North America, Australia and Sweden. Accolades include being a two time semi-finalist in the RBC Canadian Painting Competition and the Brucebo Foundation Artist Residency in Gotland, Sweden. Recent projects include exhibitions in Toronto and Miami. Hutchinson is represented by Angell Gallery in Toronto.