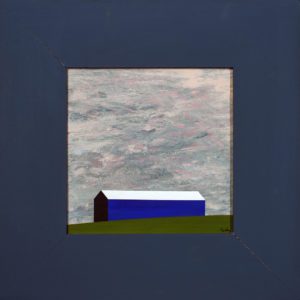 One of Canada’s leading contemporary artists, Charles Pachter is a painter, printmaker, sculptor, designer, historian, and lecturer. Over the arc of a distinguished career, Pachter developed an artistic practice that channels everyday Canadian icons – moose, hockey players, Mounties, and the Queen – into stylized pop images. Some of his influences include the continental rail travel in Canada, the “red rocket”, western landscape, American Pop Art, the Royal Family, and the relationship of art to national identity.

The Toronto-born artist holds degrees from the University of Toronto, the Sorbonne, and the Cranbrook Academy of Art. He is an Officer of the Order of Canada, a Chevalier of France’s Ordre des Arts et des Lettres, and a recipient of the Queen’s Golden & Diamond Jubilee medals. His paintings hang in public and private collections around the world. His flag paintings hang in the Toronto Stock Exchange, the Canadian Embassy in Washington, and in the Parliament buildings in Ottawa. Retrospective exhibitions have toured France, Germany, Japan, and India. In 2016, his work was featured at the Art Gallery of Mississauga and at Charterhouse in London, England.