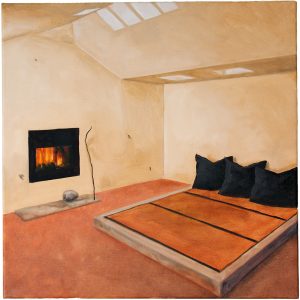 Donated by the artist and courtesy MKG127

Brian Rideout makes pictures about pictures. His work investigates contemporary images, sourced from print and online, for their art historical relevance, as a continuation of the history of painting and image production. He is interested in art as document, as decoration, as ideological accessory, as technological or functional support. His series American Collection, which the painting in this year’s Art Gems is a part of, captures Rideout’s fascination with art and design. Depicting mid-twentieth century furniture alongside iconic abstract artworks, Rideout offers the viewer a window into the past and reveals a history of time and place, thus creating a series of paintings within a single artwork.

Rideout’s most recent solo exhibition took place in November 2019 at Tile Blush Gallery in Miami. Other shows include Parisian Laundry in Montreal, AC Repair Co., Mercer Union and Clint Roenisch Gallery in Toronto, among other venues. His work is in numerous corporate collections, including RBC, TD Bank, and Estée Lauder. Rideout is represented in Toronto by MKG127.