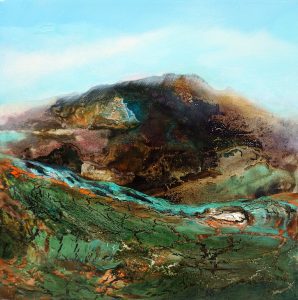 Donated by the artist and courtesy Christopher Cutts Gallery

Andrew Rucklidge’s painting practice has always been that of a seeker. He implements numerous historical techniques to navigate the horizons of his pictorial surfaces. His paintings are romantic visions of landscapes, and in some instances, they seem to be fantastical panoramas taken from the surface of a grim and foreboding planet. A sense of post-apocalyptic or primordial energy emanates from his work, done up with a dash of unbridled romanticism. There are suggestions of what might be futuristic or industrial architecture, tantalizingly vague, set against roiling surfaces, and suggestions of distant vistas and immense space.

Following his studies at Concordia University and the Nova Scotia School of Art and Design, Rucklidge received an MA in Fine Art from the esteemed Chelsea College of Art and Design in London, England. He has exhibited widely in the United Kingdom, France, Germany, Italy, Japan, United States, and across Canada. In 2013, he was the recipient of both the K.M. Hunter Visual Artist Award and the Laura Ciruls Painting Award. His work can be found in the collections of UBS London, Zabludowicz 176 (London), Kunstmuseum Gotland, Soho House (London and Toronto), Google, Bank of Montreal, Bloomberg and Scotiabank. The Toronto-based artist teaches in the Drawing and Painting Department at OCAD University. Rucklidge is represented in Toronto by Christopher Cutts Gallery.