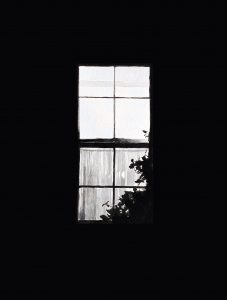 Donated by the artist and courtesy General Hardware Contemporary

Alex Bierk is a Peterborough-based painter whose father was renowned artist David Bierk and whose brothers Jeff, Nick and Charles are also artists. Through a personal lens, Alex’s painting practice over the past few years has focused on his experience with addiction and loss, being a new father, and archiving his experience in small town Ontario, where he grew up and has subsequently returned with his family. The works are as much an attempt to reconcile the past as they are the future: Bierk strives to capture candid and authentic expressions of the often conflicted, ephemeral intersection of past and present. His painting practice draws on both personal photography and photorealistic painting traditions to create images that express the complex processes of memory, history, and place.

In 2013 Alex was a finalist for the prestigious Kingston Prize for Canadian Portraiture. The following year, his work was included in After, a group show at the Art Gallery of Peterborough, alongside works by his brothers and father. His paintings have been exhibited internationally in Copenhagen, Paris, and Stockholm, and can be found in the collections of the Royal Bank of Canada and the TD Bank, as well as numerous private collections. Alex is represented by General Hardware Contemporary in Toronto, where he held his most recent solo show in 2018.

Art Gems 2020 is pleased to feature works by 3 of the Bierk brothers: Alex, Charles, and Nick.